Today I want to talk about a topic that is very close to my heart as a scientist and captive marine life lover who cares for the planet deeply (especially the non-human organisms in it and the environment). How would you like to keep more disease/stress resistant, happier, better adjusted, easier to feed marine fish at the same time as preserving coral reef environments? Sounds to good to be true you say? Well choosing a captive bred rather than a wild caught marine fish as your next pet is the way you can do this!

Let me explain; captive breeding or to put it technically “aquaculturing ornamental marine fish” was once a distant dream for saltwater aquarium owners and was thought an incomprehensible dark art… But today thanks to the food fish industry, public aquaria and scientific advancement captive breeding of many marine fishes is a reality and the list of species successfully bred is increasing every day. This contrasts with freshwater aquarium fish which are mostly captive bred and wild caught examples are the exception rather than the rule.

The difficulty lies in that each species of marine fish has its own breeding strategy brought about by unique environmental cues many of which are still not completely understood by science. Then everything must be just so for breeding to take place; low stress levels, a compatible breeding pair, the right environmental conditions, excellent nutrition, romantic music…  To date the only major marine fish groups to have species unable to be captive bred are Butterflyfish and Tangs.

The real advantage of captive bred marine fish to the home aquarist is their innate acceptance of the aquarium environment as this is all they have ever known, this makes them less territorial and aggressive in most cases. They will more readily take prepared foods and are more longlived and robust than their wild counterparts.

The biggest difference however is they are not submitted to the massive stresses of being ripped from their natural habitat only to endure a grueling shipping routine and have a new diet, alien tank mates and often unstable water chemistry. This factor alone results in many thousands of marine fish deaths every year, a lot of these deaths occur in novice marine aquarists tanks and sadly it’s enough to put them off the hobby for life. If only they had started with a hardy captive raised Clown or Damselfish to cut their teeth on, how many lives, tears and dollars could this have saved??? 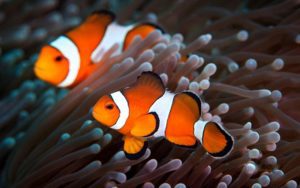 The most important aspect of mariculture (science geek title for captive breeding!) to me is reducing the pressure on dwindling wild stocks to provide our pets, many of which are taken illegally, inhumanely or at the very least unsustainably. By purchasing captive reared examples you are supporting this growing industry and technology that one day soon could be used to replenish coral reefs with their vital fish species integral to that eco-system. This aspect coupled with the advantages of not having to tame a wild animal is a win-win situation to me.

So, next time you are considering a new marine fish do yourself and the coral reefs of the world a favour and check out whether or not your chosen species has been successfully captive reared and is commercially available. It may cost slightly more but isnt it totally worth it?

There are a lot of unsung, pioneering heros out there in this challenging industry these people need to be encouraged and supported by us the saltwater livestock consumers. A special mention goes to my friend Tal Sweet and the awesome job he is doing with raising awareness and creating a collaborative knowledge-base for the home marine fish breeder.